In the spring of 2008, I gazed into my crystal ball and came out with this. How wrong I was on several fronts!

The Blackening of the White House  Ade Sawyerr 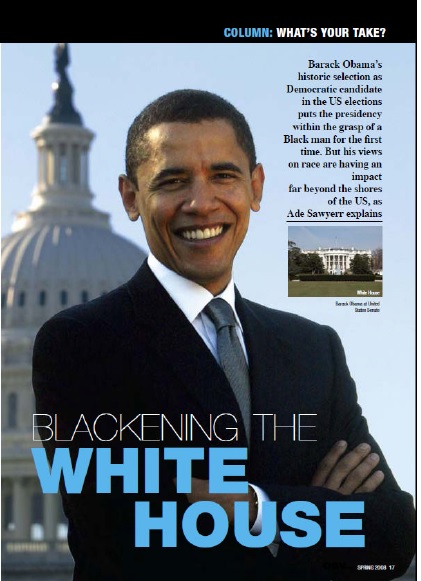 Barack Obama’s historic appointment as Democratic candidate in the US elections puts the presidency within the grasp of a Black man for the first time. But his views on race are having an impact far beyond the shores of the US, as Ade Sawyerr explains….

On 20th of January 2017, a new president will be sworn in to take charge of America; this new president will be replacing President Barack Obama who would have completed a successful two terms as president of the most powerful country in the world.
President Obama would be handing over to a Democratic Party candidate because he would have used his presidency to deliver on domestic issues of health, education, jobs and a good economy and the concerns of ordinary for all the people in America.  He would most likely be handing over to a woman president who would be following in his mould breaking fashion of his having become the first black president.

Through his historic achievement in becoming Democratic nominee for the US presidential elections, Barak Obama has attained heights that were not achievable for black men in America just 50 years ago. Then African Americans were, in the main, excluded from politics. They were fighting to be allowed to vote, but their only option was to vote for white men.